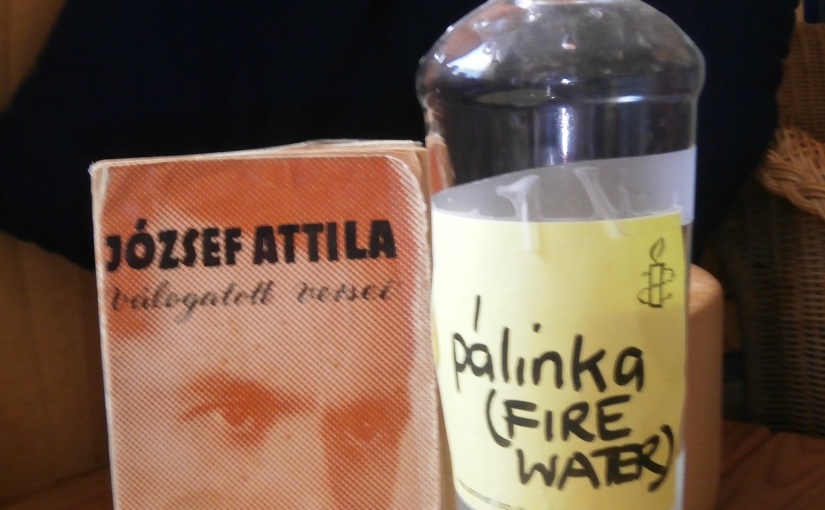 I NEVER really understood poetry until I lived for a short while in Hungary. The words would enter my mind but never really penetrated the heart. It took another country, a different culture entirely, to teach me poetry’s true power. In 1988-89, when I worked for a while as a movement coach in a big and renowned theatre in Kaposvár, South West Hungary, there was a distinguished actor in the company called Tamás Jordán. He had taken the poems of Attila József – Hungary’s national poet – and made them his own. He knew József’s lyrics forward and back, inside and out. He declaimed them in mesmerising, sell-out, one man shows, and let them loose in the theatre bar whenever the fancy took him: in short, he owned the poetry. Or maybe, it owned him. Whenever he spoke, I was transported.

But Tamás  took particular delight in shaming the ignorant young English woman  I then was (illiterate in the arcane complexities of the Hungarian language and culture), by spouting great chunks of the master poet’s work and then defying me to translate it, to understand a single, solitary, beautiful word. The smile on his face was understandably superior. Of course I couldn’t. Which was like someone coming to settle in England and not having the faintest idea who Shakespeare was. I was on the outside of the magic kingdom, with no clue, no key, no hope.

I don’t know why this got to me so badly, but it did. Hungarian is an extraordinarily musical language, its regular stress pattern and subtle syntax dovetailing perfectly with the compact rhythms of the poetic form. Attila József, already dead by 1937, at just 32 years old, is still revered as the supreme exponent of this strange and wonderful language. He is Dante, Byron, Blake. He is sublime. The tragedy is – he is almost impossible to translate. I have never read anything that comes close to the blood and might of the original.

Nonetheless, Tamás had laid down the gauntlet. And I took it up. During my last months living in Hungary, in spring 1989, I worked in another theatre in the North East, in the hard industrial city of Miskolc. It was not a happy time – I got very sick whilst I was there, and was lonely. The actors themselves seemed unhappy. But one colleague taught me this little jewel, and I have never forgotten it: ‘A semmi ágán ül szívem/kis teste hangtalan vacog,/köréje gyűlnek szelíden/s nézik, nézik a csillagok’ (‘On a branch of nothingness sits my heart/ its little body silently trembles/ gathering gently in a circle around me/and watching, watching are the stars.’ From Reménytelenül/Hopelessly by Attila József)

When I next travelled down to Kaposvár, I marched into the theatre bar one day, walked up to Tamás and spoke those precious few lyrics, so carefully learned. The astonishment and delight on his face was compelling. We made an instant connection. I learned in that moment, that real poetry doesn’t just come from a writer’s pen – it flows in people’s blood.

The dead poet – and his living exponent – did their job well, 25 years ago. For even though I was away from Hungary for over two decades, the effect it had had on me was indelible. In 2009, I finally returned: and it felt like coming home. The air was still sweet and dusty, the people still fierce and loving, the city – Budapest – still ruinous and shabby, still beautiful. I knew now that I had to learn the language properly: learn to read whole poems for myself, not just fragments learned parrot fashion from somebody else’s mouth. And in the past five years – armed with dictionary, imagination and a damned fine Hungarian teacher – I have. What’s more, I have made a working friendship with a contemporary poet, Péter Závada, whose caustic, tender, switched-on lyrics bring back to me the raw thrill I first felt when I heard Attila József being declaimed. Péter is helping me translate his own poems – a vertiginous and exhilarating process. For poetry really, really matters to Hungarians – perhaps because their language is so precious and rare. It seems to speak to their soul: and the Magyar soul is deep.

I go back to Hungary as often as I can these days. And each time two particular gifts are pressed on me by friends before I leave: some new collection of poems or other – and a bottle of home-brewed pálinka. Pálinka is Hungarian hooch – a colourless fruit brandy – and it ranges in strength and purity, depending where you get it from. (The stuff I bring home is usually home brew. Fire water. Taking no prisoners.) All the lovely fruits of the Carpathian Basin go into the mix for this potent brew, whether cherry, plum, pear, apple or apricot. All of it, take my word for it, will blow your head off.

When I taught morning movement classes in Kaposvár back in ’88-’89, we would often end up in the Green Room Bar after our exertions. Champagne (cheap Russian fizz) and red wine were a popular combination. But the pálinka chaser was never far away either. These days the drinking is rather more measured among my older and wiser (?) companions, but I notice that the young are as keen as ever on pálinka, such a slinky and potent national brew.

On a recent trip down Memory Lane, I got my friend István to take me for a drive into the countryside to find a tiny village called Nagycseppely, south of Lake Balaton in South West Hungary. Powerful in my memory is this gorgeous rural spot, where I stayed one summer in a small yellow cottage with friends – who introduced me to Miklós, the local Roma scallywag, with unmatched eyes and a wild way with his horse and trap. Miklós brewed pálinka – and there was a village distillery too, positively overflowing with the stuff. All illicit, undoubtedly. Burning the brains of the villagers – who spoiled me rotten with their hospitality, their wonderful food and proud customs. And who never took no for an answer when the glasses were being re-filled.

It’s all so different now: another country entirely (although the hospitality is undiminished), where the strangely familial control of communism has given way to a wolfish capitalism where everything can be bought (including freedom) at a higher and higher price. As I drove through Nagycseppely in 2013 with István, the village I knew from 1989 was unrecognisable to me – with barred gates, concrete drives and newly built mini-mansions, where there used to be one-floor cottages, dirt tracks and chickens. But the pálinka house is still there – no longer a naughty little shebeen, but now a fancy big business, complete with advertising placards, an official licence, and plenty of gaudy lights to attract the tourists. Whatever strange changes come to Hungary – and there have been so many in its turbulent and bloody history – it seems there are two things they just won’t do without. The poems. The pálinka. And thank goodness for that.

I am a writer, dancer, T'ai Chi and Reiki practitioner in Leeds, West Yorkshire. I am dramaturg and performer at the Performance Ensemble and teach at Leeds Playhouse. Otherwise, I am either writing freelance books and articles, or digging in my garden, or learning fiendishly hard Hungarian grammar. Hungary is my favourite place, after Yorkshire! View all posts by barneybardsley

4 thoughts on “Poems and Pálinka”

This site uses Akismet to reduce spam. Learn how your comment data is processed.