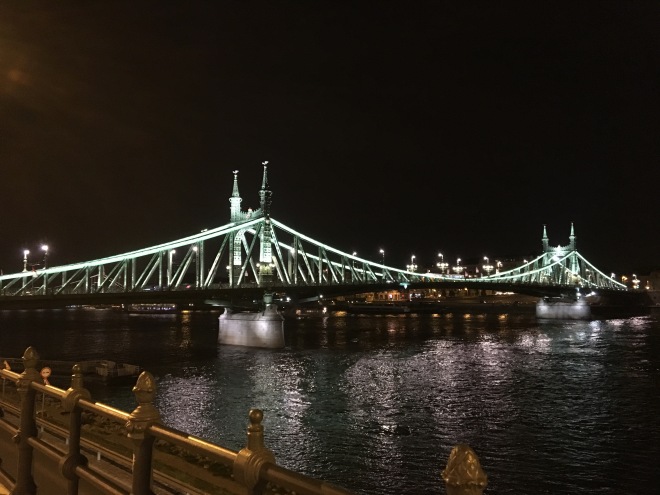 THE SNOW was thick on the ground, and the airport terminus lay hidden in grey fog. There was no one around, except for the occasional soldier, gun bulging at his hip, an inscrutable expression on his face. She went through customs without being stopped. Just as well, because her suitcase was full of Irish whiskey, which the Hungarians loved, but couldn’t get their hands on, behind the Iron Curtain.

Budapest was empty too, except for faded yellow trams – and the jaded glow of a red star on top of the government buildings. When they got on the train to go south, perching in tiny carriages, on cold seats of green leather, she could see nothing out of the window, except for  fat icicles, hanging from trees, half submerged in the deepening mist. Already she loved this place. It felt strange. It felt like home.

The actors were so friendly. None of them spoke English, and she spoke no Hungarian, but they got by with sign language. And the whiskey and pálinka soon loosened their tongues. The company had worked together for years. They lived in a tight knit community – the actors’ flats just across the road from the theatre – and they spent all their free time in the subterranean bar, playing cards, gossiping and drinking.

The work they did on stage was astonishing. Such courage. Such physical bravura. And in every play, a hidden subversion, reaching out to their audience to give a message of liberty, when open dissent was completely forbidden. Hungary: the happiest barracks in the Eastern Bloc. That’s what they said. But it wasn’t true. The sorrow was palpable. And ran deep.

“We aren’t allowed to travel abroad”, explained her friend, with the help of an interpreter. “Except every three years. And only to somewhere approved by the regime. Once we were invited to a theatre festival in France, but the apparatchiks said no, because the French actors were clearly Maoist insurgents, and would be a bad influence on us. If it’s so great over here, why don’t they let us go and tell the whole world about the joys of our communist state?” He laughed. But it was a laugh without humour. More of a sob, really. And a shrug of the shoulders in defeat.

As for her, she had such privilege. A British passport. She could travel where she liked, and knew she would always have the freedom to go back home. It gave her an air of authority and mystique, and people wanted to talk to her, wherever she went. As for her, Hungary felt like a secret garden, full of passion and delight.

Suitcase stuffed with whiskey and teabags

The company kept inviting her back, to teach the company movement skills and physical theatre. But the main appeal, she knew, was her Britishness. A fresh breeze blowing in from London from time to time – with a suitcase stuffed with whiskey and tea bags.

When she finally went home for good, after a three months stint, during which she got really sick, and longed to be in England, it was summer 1989. The Berlin Wall fell  four months later. The red stars were dragged from the roofs, and a new era began. And in the end, Hungary even joined the European Union. Her British passport and their Hungarian passports became united under a single blue flag with hopeful gold stars all across it.

Now it’s her own passport that is changing. The UK is leaving the EU. The freedom of movement that her Hungarian friends so envied, and that she took so much for granted, is over. Oh, they can still travel where they like. But what about her? Will her government maybe let her out, every three years or so, to a country whose views are sufficiently in line with theirs?

She feels like a fraud now, and such a fool. She once believed she was free. She felt her status like a magic cloak, wrapped around her ignorant young shoulders, breezing through Eastern Europe with an air of entitlement and superiority. Now she knows the truth. That she is simply a prisoner of a tiny, spiteful island, slowly sinking under the weight of its own post-colonial delusions. And how she longs for that slow train out of Budapest now, with snow piling at the window, illegal contraband in her case, and a sense of something beautiful and foreign and free, just ahead of her, on the country railroad track.

This piece was written as a response to a question from theatre director Alan Lyddiard, whose company, the Performance Ensemble, I am a member of: “If anybody in the world was allowed to travel anywhere in the world, would this be a good thing?” The Ensemble’s current work in progress concerns itself deeply with freedom of movement, and you can read more about this on their website.

I have written extensively about my deep love affair with Hungary, and some of the links to articles and short stories available on this website can be found on my page entitled Blog and Features Archive.